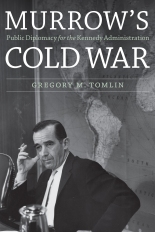 The following is an excerpt from Murrow’s Cold War (May 2016) by Gregory M. Tomlin.

In March 1961 America’s most prominent journalist, Edward R. Murrow, ended a quarter-century career with the Columbia Broadcasting System to join the administration of John F. Kennedy as director of the United States Information Agency (USIA). As director of the USIA, Murrow hired African Americans for top spots in the agency and leveraged his celebrity status at home to challenge all Americans to correct the scourge of domestic racism that discouraged developing countries, viewed as strategic assets, from aligning with the West.

Chapter 8: Birmingham, the Story Heard ‘Round the World

“We cannot do good propaganda unless we have something good on which to base it.” —Eleanor Roosevelt, May 26, 1961

While Kennedy utilized his executive power selectively to address aspects of American racism, Murrow faced the challenge of explaining the civil rights movement to the…